“We’re looking at a lot of work by a lot of people to make this happen, and the best part is that it’s for all of our veterans,” said Scott Reese, Bingham County emergency management director. “The contractors, whether it was the concrete, electrical or landscaping guys, all knew this was a special project. It wasn’t just another job to do this summer; it was a sacred place.”

The program began with the Bar J Wranglers, a popular western singing group from the Jackson Hole area performing our national anthem. The Blackfoot and Idaho Falls fire department Pipes and Drums groups performed during the raising of the American, Idaho State, and Bingham County flags for the first time. Reese said he was extremely satisfied with the design of the county flag.

Representatives from the U.S. Air Force, Army, Marines, Navy, Coast Guard and POW/MIA participated in raising the flags for their respective organizations.

Lt. Gov. Brad Little was a keynote speaker and said this event meant more than honoring the veterans, it honored the entire community and the sacrifices they’ve made.

“Now you’ve got a place to celebrate every Veterans Day, every Memorial Day, and it will be a meeting place for the community to remind upcoming generations of the sacrifices that have been made in the past, particularly by members of the community,” Little said.

"Local touch is always important. It's got such a prominent place. I love the fact that the flags are all illuminated, so you could see them at night. The fact that all of the different branches of the service are represented and the fact that they've got a hometown sculptor that will be making the lead sculpture there," Little said.

It is a great reminder for people to remember to honor those who have served our country, the lieutenant governor said.

"We have fewer and fewer people that serve in the military. You know, it's their families, it's the sacrifice they make, the Guards men and women and the active military; it's the fact that their families are left behind. It's important they know the communities support them," Lt. Gov. Little said.

Former Pingree resident Ben Hammond is designing a 7-foot bronze statue of a World War II military officer handing a folded American flag to two children. His work is on display across the United States, including the Pro Football Hall of Fame in Canton, Ohio.

“We wanted to make it as universal as possible, but it’s hard with the military because there’s the five different branches,” Hammond said. “The important thing is him passing the flag, which not only symbolizes that somebody gave their life for the country but also passes on that the WWII-era veteran is all but gone from us. So it’s also about passing on the flag and the responsibility to this rising generation.”

Brig. Gen. Alan Gayhart also spoke at the event. Gayhart was commissioned through the Officer Candidate School in May 1977. Prior to receiving his commission, Gayhart served as an enlisted member of the 116th Armored Cavalry Regiment of the Idaho Army National Guard. He also commanded the 116th Brigade Combat Team in Kirkuk and Sulaymaniyah, Iraq, during its deployment in support of Operation Iraqi Freedom III. He retired in 2012 with 42 years of service to our nation.

“Our veterans crouched in the muddy trenches of Europe, confronted the enemy from the rocky crags of the Italian Alps and struggled up the sandy beaches of Normandy,” he said. “They fought on the war lands of the Pacific and the islands critical to the defense of our nation. They froze through the bitter winters in the mountains of Korea and steamed in the sodden jungles of Vietnam.”

He continued, “They chased terrorists over the 10,000-foot mountains of Eastern Afghanistan and squinted against the dusty winds on the bleak empty landscapes of Kuwait and Iraq, but that’s not all our soldiers have done. These are ordinary men and women who have been faced with extraordinary circumstances. Soldiers and veterans who know the true meaning of courage and service to country.”

The second phase of the memorial will involve the unveiling of the wall featuring the names of those who died while serving our country.  The final phase will be the statue dedication in 2019. 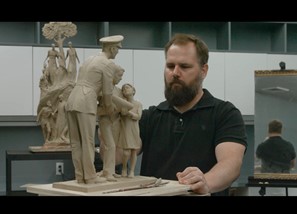 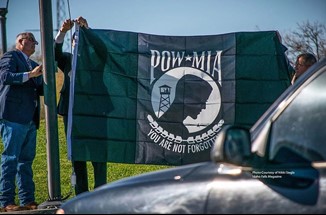 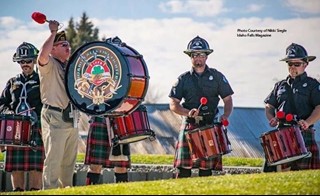 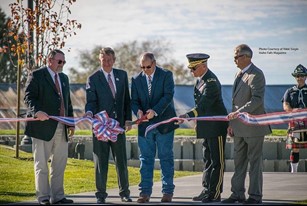 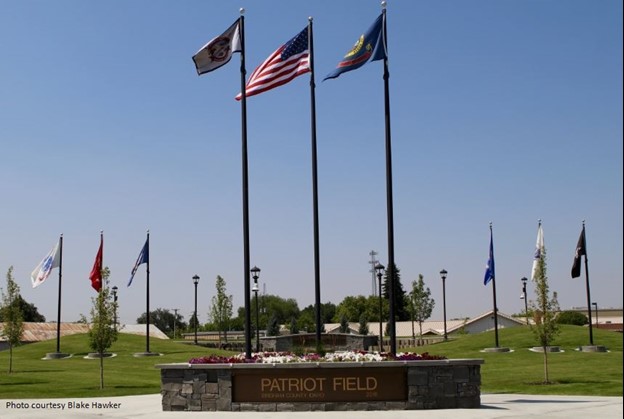